As well as normal holidays, you should be aware of relatively longer and popular holiday seasons in Japan.

The word “relatively longer” here means about 5days or more in holidays.

For those who are not familiar to Japanese holidays, I will list the longer holiday seasons in Japan below. 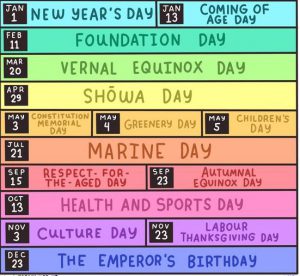 Different from European countries, Japan does not have Chrismas holidays. Instead, Japan has longer year end holidays and New year holidays.  In many companies in Japan, holidays usually start at December 28 or 29, and end around January 3 or 4.  For many people who live in major cities like Tokyo, this is the time for them to go back to their home towns.  This is more home town oriented holiday season than others.

Please be reminded that it is very expensive to take longer transportations like Shinkansen or airplanes during these holidays.

End of April thru first week of May: Golden week holidays

Golden week usually starts at the last week of April and ends at the first week of May. In this holiday season, of course, there are many people who go back to their home towns, but this is more travel oriented holiday season than others.

Do not ever try to drive on highways on this season. If you are on highways around Tokyo, you should be prepared to face most likely encounter more than 20km of traffic jams, and there is no way you can get out of it.

Because there are not consecutive long holidays, this holiday season is not as big as the other holidays above. But many workers can most likely 3 or more days of holidays which they can take short trips.

Tips for getting JR tickets, travel passes and rail passes.

"Eguchi Dango" in Nagaoka, Niigata If you have a chance to go to Niig...

Tokyo Disney Resorts are NOT in Tokyo. Did you know this fact? ...

Here are some tips for choosing an arrival airport for traveling to Tokyo.

Mt. Fuji and a frozen lake Mt. Fuji is just beautiful. You can drive ...

What to Pack for a Trip to Japan This article is for those who are pl...

Must Try Foods in Nagoya Nagoya city is only 1.5 hours away from Toky...

Bullet-Train Bentos The another joy of getting on the JR’s bullet tra...

I definitely imagine travelers are confused in transportation syst...

Crowded Trains in Japan The “rush hour” in Japan might be something t...

Escalators in Japan Hi, this is Ted again. I was pretty busy last wee...

Hair Salon in Japan What do you want to do while you are in Japan? S...

You can find the free wifi information here. Those wifi spots are available without any registration.

Bath culture is one of the most major life habits for Japanese. This m...